Long ago, Veeshan gave a scale to his disciples. That scale has proven to be nothing more than a Pandora’s Box. One entity took control of it and reigned as master over his claimed land. That entity was Lethar the Black. He confronted and defeated anyone foolish or brave enough to come close. Once a noble dragon, he is now a devious, twisted creature. Lethar was a dragon and dragons are eternal, but with eternity come desire and ambition. Lethar was familiar with those feelings.

Lethar was assigned by the Council of Crystalwing to be the lead guardian of Veeshan’s artifact. In a great night of turmoil, the scale lured him into madness and selfish desire. He claimed the artifact as his own, crushed his opposition and proclaimed himself master of the land. During many decades, he ruled the temple of Veeshan with an iron fist.

Crusaders of the Scale and Scholars of Ro allied together to put an end to his madness. They enlisted the leadership of Diligence to bring back the peace that once reigned over The Serpent Spine. Jenray, who heard the heroic tale of Beltron’s fall to Diligence, asked them to put an end to the war that was ravaging the noble clan of dragon and their progeny, the Drakkin.

Diligence marched toward their task knowing this journey was going to be long and difficult. They faced many dangerous foes and lost many friends along the way, but always kept their heads up and focused on the task that lies ahead.

Ragaroth asked Lethar to step down and face the judgment of his own kin. Lethar, blinded by his own ambition, made a counteroffer to the leader of Diligence: leave or die. With no other choice, Ragaroth give the signal to attack. After an epic fight, many casualties, lost loves and long lost agony, Lethar was put down to his final peace. The price he paid for his ambition and desire through his madness was his own life.

With peace now restored and balance back in place, Diligence moves forward to their new adventures. No one knows awaits them on the horizon, but the gods will surely have something planned for them. 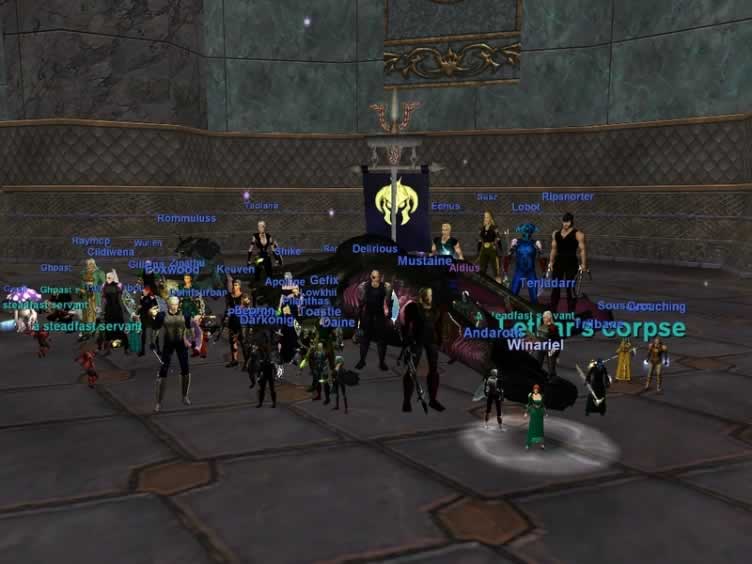 Fergarin shifted uncomfortably in his chair, unnerved by the sudden appearance of Echus at his side. To think at one time, the counsel of this giant was once an honored and rare occurance. He had fallen far in the ranks of even his outcast Wraithguards after his involvement in the humiliation of King Odeen. He stared uneasily at this small figure standing before him, this same figure had a hand in the slaying of Geriok, whatever reasons had brought him here, were not to be taken lightly.

“Job’s done.” quipped Echus, while balancing the business end of a Sekv on his fingertips. While he spoke very little, he was the chosen herald for this particular message. After the fall of the shade king, the burden of Lethar and Dyn’leth’s advancing armies stood as the sole threat to Valdeholm. The seemingly endless legions of Drakkin, lead by Stitch and Sothgar, threatened to decimate Valdeholm and lay the city in ruins under the banner of Ashengate. With this simple message, in the form of two severed, vaguely elven heads thrown at Fergarin’s feet, Echus relieved the giant empire of it’s last great struggle.

The curt message struck Fergarin, and quickly spread through the great halls and corridors of Valdeholm. Word reached Commander Haesgrin, Jotik the Guardian and the vigilant Cryptguard Zerakt. Born to be warriors as the chosen race of Rallos Zek, the message came as a reaper, heralding the end of their days on Norrath. All races were born with some purpose, some greater reason to exist and prosper in the name of their founding diety. These giants were born to fight, to become the embodiment of conflict; to thrive on war as their very purpose for being.

But the mantle of warfare was taken from their shoulders today by this one message, from this one rogue. The giants soon began to leave the fortified city gates, unhindered by shade attacks or assaults from drakkin legions. The bonds that war brought to their society were loosened and the giantslost themselves in the complacency that peace brings.

With Ashengate in ruins, Valdeholm’s era had begun to fade. Diligence’s brief tenure in the Serpent Spine mountains had destroyed both empires; one intentionally, and one by the best of intentions. Diligence would soon seek its fortune in an unwaning land, facing an old enemy.