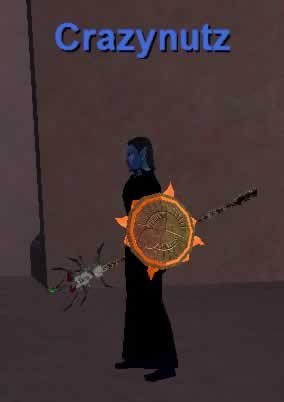 Commodus strained for fleeting breath. Once the embodiment of the Norrathian sun’s core, he was shaped by Ro to take a more humanoid form and serve as his greatest guardian. However, he was unable to contain him within a single entity. His entire essence required several shells to contain the various aspects of his eternal mind. His harsh justice, his unsurmountable fortitude and aspects of his devotion, temperance and wisdom were inlaid into the rivulets of the near-impervious shells of Solusek’s magma golems.

He stood unmoving for eons as a tireless guardian for the heart of Solteris. Waves of Mayong’s elite trueborns were incinerated by his flares. While he chose not to meddle directly in the battle for Solteris raging above, he made sure that nothing could interfere. However, he now lay before a contingent of Diligence’s elite, crumpled in a mass of rapidly dissipating plasma.

The battle was not without attrition on both sides, however. Our scouting parties were the first to go. Both Solusek and Mayong had become increasingly aware of our presence and intentions on the burning islands. When our rogue messengers were sent forth, a force of efreeti was waiting in ambush with a message of their own. The charred remains of several of our rogues, as of yet to be accurately identified, were returned to us in a gruesome hail from the island above. It became clear to us that when meddling in the affairs of Gods, an iron fist, not a whisper, is the only message to send.

The raining fists of our grandmasters cracked his core shells, releasing steam with every furious blow. The frosty composure of our overlords parried his advances, diffusing the intensity of his onslaught. The glacial frosts summoned by our arcanists proved to be too much for Commodus to endure. Entropy comes for all things, even Suns. He envisioned his near-eternal existence ending as a supernova in some far-off era. Yet here he lay, a humble puff of steam his epitaph.