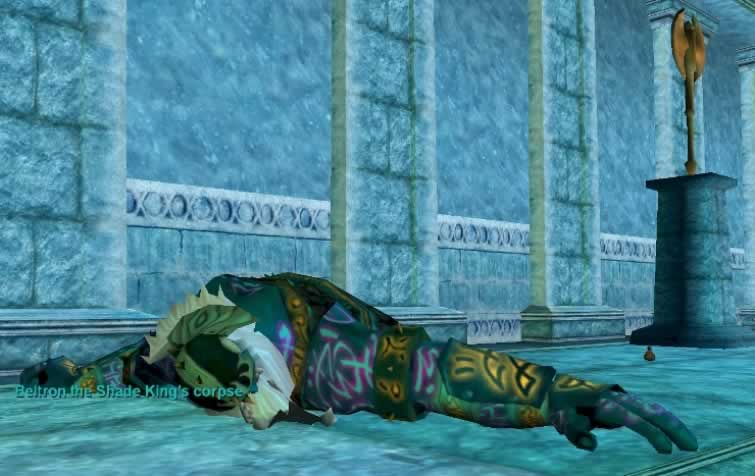 Long ago, Rallos Zek’s creations , giants, orcs, ogres, and goblins invaded the Plane of Earth. The Krithgor giant tribe decided to not enter that war. Back in those days, Beltron was their king. The Krithgor were a noble giant race, and their king was no different than his subjects. Sadly, Beltron died not long after the war ended. The tribe put their King to rest deep within Frostcrypt, the tribe’s burial grounds. Rallos was so angered by Beltron’s treason that he laid a curse upon him. Beltron was resurrected as an abomination and went on a rampage slaughtering every giant that was within Frostcrypt, making them the Shades of Zek. That was the saddest day in Krithgor history.

A century and decade have passed, the hunt rages on deep within the walls of the crypt to lift the curse laid upon Beltron. The Wraithguard have lost many valuable soldiers in the war against the Shade king. After putting to rest many lost souls, Diligence proved themselves worthy to aid the Wraithguard and their leadership in the quest to free the cursed souls.

With every former hero of the Krithgor behind them, Diligence marched toward the last room of the crypt, the throne room. The closer they got, the more they can hear the mumbling of the Shade king.

After a long battle, the Shade King’s fate was sealed. Beltron’s corpse lay still on with Diligence surrounding it. As Ragaroth checks his corpse, he found satisfaction in their victory by the smile on Beltron’s face. The lorekeepers of Diligence are still wondering why such a majestic and noble creature had to suffer so much, but then again no one can explain the way of a god. Diligence only wishes Beltron’s soul finally rests in peace.

Harfange the Black was born in the primordial era, when the fledgeling pantheon had yet to fully envelop the corners of Norrath. His was the task to bind the Krithgor race together; to stand as a pylon in direct defiance of all other gods. He was the first chieftain, conqueror and King of the Krithgor. For his efforts, Rallos gifted him with Fellwinter, harbinger of the deathly frost. Harfange carved a niche in the world for the Krithgor, and for this, his own protectors followed him willingly into the crypt, sealing themselves and becoming permanent guardians to his legacy.

Fridleif, Master Warcraft was the second king to the Krithgor. Cunning and bombastic, he set everything in place to succeed Harfange after his demise. He ushered in a new era of prosperity for the Krithgor, but at the cost of compromising everything they stood for. His underhanded deals with Ashengate brought him substantial wealth, at the cost of Krithgorian life and land. In the end, he was assassinated by a sect of Zek loyalists, for having given the secrets of the sacred Arcekor blades to Sothgar’s attendants. This regicide plunged ancient Krithgor into chaos. Factions loyal to both Zek and Fridleif engaged in bitter battles of attrition. It was the actions of Wulfnor that brought unity back to the Krithgor. For his treachery, even in undeath Fridleif is cursed to constantly battle for the wavering loyalty of his own men.

Wulfnor, while not a king, was widely respected among all lineages of the giant ancients. Unmatched in gladiatorial combat, and a seasoned lorekeeper, his wisdom was sought by many in times of duress. When the Krithgor faced open civil war, it was his voice that quelled the leaders of the opposition to consider open diplomacy. He realized that the Krithgor race was beset on all sides. Ashengate no longer had a puppet sympathetic to their cause among the leadership. The forces of the Rathe began their slow creep towards the city gates. Even the mythical beasts of Sunderock picked away at the Krithgorian hunting parties. If they were to survive, they had to realize that they were the sole stewards of Rallos Zek. Wulfnor brought the giants unity and a renewed sense of purpose. The highest honor for the lorekeepers of ancient Krithgor was to be buried in Frostcrypt, in the wing of Wulfnor the Gladiator.

The Overseer of the Cryptguard is the unliving codex of all Krithgor who have passed from this life to the next. The building of the Cryptguard took many, many generations spanning Harfange’s era through to Beltron’s reign. The process to add even a miniscule amount of living froststeel to the gargoyle is extremely time consuming and physically depleting for the Krithgor lorekeepers. The end result is a nearly indestructable being comprised of the hardest alloys found in prehistoric Antonica as well as a living piece of every Krithgor who lived. The Overseer knows the most intricate details of the Krithgor, as if it was Tallon’s own scrutinizing eye bearing down on them. Lineages are extrapolated to kings, lorekeepers and betrayers dozens of generations before their time. The secrets the Krithgor have hidden in their blood are visible only to the Overseer. It is said that even if the Krithgor were wiped from Norrath, the Overseer of the Cryptguard would be able to rebuild them from their bones outward.

The northern wing of Frostcrypt beyond the labyrinth, guarded by impenetrable rime golems houses the burial chambers of Beltron, the Shade King. Betrayer of Rallos Zek, he was cursed to become the embodiment of warfare and the source of all tribulations that plague the Krithgor to this day. He was the first to become a shade of Zek and upon his death brought many dozens of living Krithgor into the shadows with a murderous rage. Few remain who remember stories of his life, his actions and his character. All that remains is the image of the shade king: a relentless, remorseless killer who has no need for rest as long as even a single Krithgor breathes.

The halls of Frostcrypt grow with every passing night. With the cowardly Odeen leading Valdeholm, the demise of the first giant race is but a matter of time, save for the few diligent who refuse to see this come to pass. Through wrenching battles, we have crumbled the cryptguard, bested the gladiator, out maneuvered the master warcraft and humbled the founder. However, we honor and remember those that came before us, those that led the Krithgor and saved them from impending destruction, even as we seek to conquer their last remaining legacies. Only Beltron remains.

The Shade King shifted uneasily on his throne. The sounds of battle rang through the halls of his domain with increasing frequency and intensity of late and he longed to join in. Rallos Zek had been quite clear in his orders, however, and Beltron was to remain here in his icy throne room. Despite his uncontested prowess in battle, it was his unmatched affinity for strategy and tactics which led him to be the one chosen by Rallos to lead his undead army of vengeance against Valdeholm. So here he sat, trapped within his frozen prison, hoping against hope that this most recent Wraithguard incursion could finally penetrate his formidable defenses and allow him to once again unleash his boundless rage upon the living.

A small coughing noise drew Beltron from his revelry. Were one such as he even remotely capable of it, Beltron would surely have been surprised by what he saw before him. Smaller by far than even the hunting wolves of Valdeholm, the diminutive intruder gave a perfunctory bow. “Greetings Beltron, King of the Shades. I bear a message from my liege, Lord Ragaroth.”

His thoughts racing, Beltron scrutinized the tiny invader. What, exactly, was this creature that stood so boldly before him? Surely not the work of Rallos Zek, for he would never have created a vessel so clearly unsuited for the rigors of war. This, then, must be the handiwork of one of the lesser godlings, built perhaps to dance or recite poetry. While the undead are largely incapable of what could be termed emotions, Beltron nevertheless felt a stab of disappointment, his hopes of decimating a Wraithguard raiding party faded quickly.

Who then was this Ragaroth? Had someone finally overthrown doddering old King Odeen and claimed his throne? Possibly, Beltron pondered, but that still wouldn’t explain the fleshling before him or how, after thousands of fruitless years, the Wraithguard had finally managed to reach so deep into his domain. No, a more likely scenario would be that the Holmguard had finally enlisted the aid of a group of mercenaries to do what they themselves could not. Ragaroth, it stood to reason, would be the leader of these sell swords and had no doubt sent his messenger to trick Beltron into leaving his fortified crypt as they lay in ambush for him. Did they truly dare to challenge the god of war’s chosen one? Amateurs!

“Neither you nor your liege are of any consequence to me.” Beltron roared. “I exist solely to exact revenge unto the traitorous citizens of Valdeholm; those who have forsaken the very god who gave them life in his time of need. Whatever trickery you came here to perform will be to no avail.”

“I come with no trickery,” Echus assured, “simply a warning.” If the waves of pure hatred that poured out of Beltron bothered him, the rogue’s calm demeanor showed no sign of it.

“A warning!?” Beltron bellowed incredulously. “What warning could a frail fleshling possibly have for The Shade King?” As his temper rose, so too grew the aura of raw, unbridled power that surrounded the rotting general. The stench of ancient decay and fervent madness began to give way to the aroma of burnt o-zone that was the immediate precursor to one of two things: a powerful lightning strike or the unleashing of deep, powerful magic. As they were under ground, Echus was sure it would be the latter. Rallos Zek had clearly spared no expense in creating the instrument of his revenge.

“Simply this: make peace with your gods, Beltron. Diligence is coming for you.”

At this Beltron gave a mighty roar, shaking the Frostcrypt and all within it. With one impossibly fast lunge, he snatched up the rogue and tore his body asunder; wringing the still writhing form between his gigantic undead fists before flinging the remains against the far wall of his throne room. Enraged, the Shade King gave another bellow and closed in on the corpse to commit further atrocities upon it, his bloodlust still far from quenched. Before he could, however, the small glowing soulstone that adorned the necklace Echus wore shattered and a thin curl of smoke arose from within. With that the corpse vanished, leaving only the faint sigh of air rushing in to fill the void the battered corpse had so recently occupied.

Alone with his fury, the Shade King raged, assaulting the very walls of his crypt in an effort to vent the unending wrath that threatened to consume him. He called for his generals, his champions and other minions, but none came. His cries echoed through the now empty halls of Frostcrypt and it was then he realized that he was alone. Diligence, as they called themselves, had done what the combined might of the Valdeholm Empire could never do-they had overcome the might of Rallos Zek’s accursed army, leaving only the King of Shades to sit and await death at their hands.

For the first time in his life and subsequent unlife, Beltron knew fear…