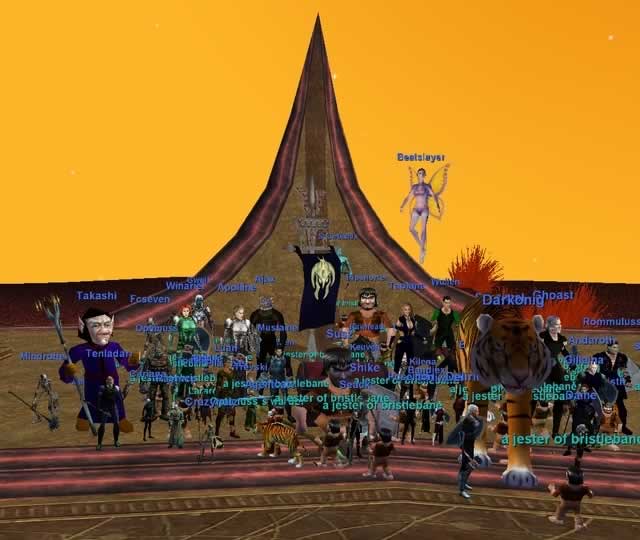 “Come forth from the shadows and kneel before me, mortal.” The booming voice of Mayong Mistmoore filled him, though the former vampire’s fanged mouth remained closed. The discovery of his approach came as little surprise to Echus, given the circumstances, but he was disappointed nonetheless. The role of Keuven’s herald offered little in the way of reward and often much in the way of pain, but startling his prey never grew tiresome for the rogue.

That he was even able to find shadows to attempt concealment here in Solteris, the Plane of Sun was a true testament to his prowess. Echus was capable of sneaking past giants, dragons, even the undead and other abominations that didn’t need eyes to see, but this was no common foe – this was a god.

“The only time I, or anyone from Diligence, will kneel before you will be to check your corpse for valuables.” Echus replied matter-of-factly.

Mayong’s brow furrowed at this, clearly disapproving the rogue’s flippant reply. “Your confidence is ill-founded, brigand. Might I remind you that your earlier ‘victory’ against me was all a carefully orchestrated sham? The artifacts of power you thought I had left carelessly strewn about my home were actually carefully placed in the hands of my lieutenants, entrusted to beings that were only just strong enough so you would not grow suspicious of my true intentions. Why the only guardians of any real worth you faced were my beloved paramours, who very nearly gave the whole thing away in their overly-melodramatic zeal to please me.” At this a smile began to play at the corners of Echus’ mouth, as if he were trying to stop from bursting out laughing at some hilarious inside joke. “As a matter of fact,” Mayong continued, “their ‘banishment’ from my castle was merely my way of keeping them out of harm’s way so that they could join me here to stand by my side as I plunge Norrath into permanent night. Surely you noticed them on your…way…”

At this Mayong’s voice trailed off; the grin spreading slowly across Echus’ face telling the god all he needed to know. A spasm of pain flashed across the god’s countenance; he had not planned for this. How clearly he recalled giving Christine, always his favorite, the wickedly sharp dagger crafted by none other than Dag of the Forbidden Circle, widely believed to be the greatest Iksar artificer to have ever lived. She had affectionately referred to it as ‘Throatslitter’, for that is how she had planned to use it against her sisters as soon as she could be sure that doing so would not anger the master. The fact that this assassin now wore it so openly, low-slung on the hip in the style of the warriors rather than hidden in one of the seemingly infinite concealed sheaths that rogue armor invariably featured was an intentional insult.

Recovering quickly, Mayong appeared to gain a measure of peace from the news. “It is just as well. Christine, Althea, and Brenda were my one indulgence; the last vestiges of mortality and its pointless distractions. Had I not been so preoccupied with my assault on the sun god I would surely have noticed the approach of Diligence and ended you myself. It would appear my opponent has enlisted your aid and even now ushers you through Solteris so that you might aid him in his doomed attempts to save the sun.”

“Diligence doesn’t work for Solusek Ro or any god. If the Solusek gets in our way we will not hesitate to destroy him, too.” The rogue delivered all this with very little emotion, but Mayong doubted not a word of it. “We realize that you must be a bit preoccupied with your assault on Solteris…”

‘Preoccupied’ wasn’t the word for it- the amount of focus required even to be in the Plane of Sun by the recently ascended vampire was far more taxing than he had ever anticipated. That, coupled with the rigors of leading an invading army against a god in his home plane, was almost more than even Mayong could manage.

“…but Keuven wanted me to warn you of our approach to give you ample time to prepare. Diligence is coming for you, Mayong, and we expect a decent fight this time.” Echus paused before concluding: “It ends here.” At this he stepped back to once more rejoin the shadows, scare as they were in the heat-blasted sandscape, leaving Mayong alone with his thoughts.

His mind racing, Mayong Mistmoore assessed the situation. Standing now in Solteris, the Plane of Sun, preparing for the final push against Solusek Ro was a moment he had planned for eons, but Diligence was most definitely not a part of his plan. Against other foes he was sure he could find an out; either through lying, bribery, trickery or misdirection. Those tools had, after all, allowed him to ascend to godhood, but Diligence would not be so easily swayed; this was their chance to strike and they damned well knew it.

Mayong Mistmoore, Master of Dreadspire and the Demi-Plane of Blood, whose name was whispered in hush tones around campfires and used to scare misbehaving children across Norrath for centuries untold, Norrath’s first vampire and newest god, felt a shiver run down his spine despite the scorching heat. Trapped as he was with Solusek Ro to the front and Diligence closing in rapidly from behind, Mayong had to admit that his chances didn’t look very good.